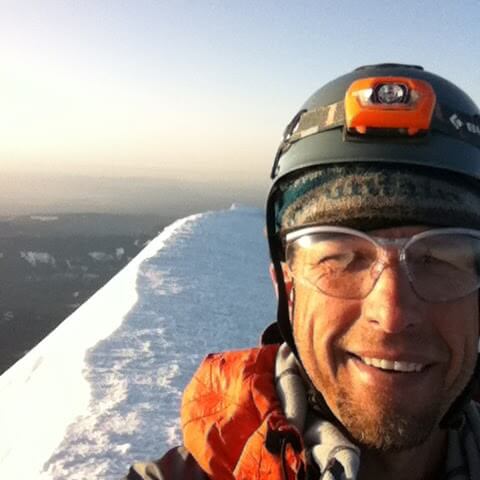 By Paul Wellner and Andrea Cameron

When Paul and I first sat down to write this story, I was already impressed with the long list of accomplishments that traverse his life. What we didn’t know is that the story would get even better.

Paul Wellner is Mechanical Engineer who started working with SIGMADESIGN in 2010. He likes the flexible, family-oriented work environment because he says, “it’s never the same and it keeps my interest.” Paul’s favorite type of project is 3D printing because he “loves the notion of printing out various designs and ideas.”

Born in California, Paul moved to Hillsboro when he was 4. His dad worked for Hyster Company. Paul began working for a heavy equipment firm himself designing and reverse engineering various pieces of equipment. His experience has also included working on hydraulic robotics, automation equipment and ink jet printers and for work he’s traveled to Ireland, France, Malaysia and China.

CLIMBING MOUNTAINS
While Paul was working in Alabama, he began to recognize how much he missed the mountains back home, a longing he didn’t know existed. When he moved back to the Pacific Northwest, he met friends on Mt. Hood from Colorado and started climbing local peaks in the Northwest states. He also began rock and ice climbing.

As Paul became a more experienced climber (he’s climbed Mt. Hood around 20 times), he noticed the lack of preparedness by many climbers. This inspired him to write the book, “Climbing Mt. Hood The Climbers Ultimate Resource.” He notes, “There are so many injuries on Mt. Hood. I wanted to let people know that it isn’t easy and it should be taken seriously.” In the book he provides many details about how climbers can be safe on their own.

EMERGENCY MEDICAL TRAINING
Paul has a passion for helping others. He has been very active in public service and medical preparedness. As he became more involved in climbing, he was drawn to safety on the mountain. As a CPR instructor for Mt. Hood Ski Patrol Paul is required to do three additional instruction sessions per year. He would like to do niche in home training for “Mom groups” that want to learn CPR. His experience in medical training includes:

TRAINING IN ACTION
On September 4, 2015 Paul traveled to China for SIGMADESIGN. He was there for two weeks on build support for a high profile SIGMADESIGN client. On the flight back this happened according to Paul:

Boarded a 12-hour flight back to the USA on 9-18-15 traveling from Shanghai China to LAX a 12- hour flight I will not soon forget. About 2 hours into the flight darkness having set in, a call comes across the intercom for anyone with a medical background to come to row 46.

It’s nighttime and row 46 presents under dim lighting a 69-year old Chinese gentleman in distress. A family member says, “He thinks he is having a heart attack!” I kneel down beside him and try to clear my head. I administer O2 and report vitals which are relayed via SAT phone to medical personnel on the ground. I am told he had lost consciousness and was very weak and tired.

His vitals are not good but he is awake and speaking to his daughter who relays the info I need. Ground personnel ask that I continue to monitor. The short version is that I was asked to monitor his vitals throughout the flight. I was told later that we were on the verge of being redirected and if I hadn’t stepped in we would have landed in Narita, Japan where medical personnel were standing by.

As volunteers we wonder sometimes if the time and training is all worth it. This was a life changing event for me. So many people thanked me including the flight attendants and the pilot upon my exiting the plane. Delta sent me a nice thank you e-mail and gift basket in appreciation of my efforts. The best part of all was the look of thanks in that man’s eyes and his thank you in Chinese which was translated for me. “You’re most welcome,” I said. This is what I train for.